The BMC held Club Championship Events in five categories on August 15th and 16th. The event was attended by 64 players. Being that we are relatively new to this website thing and, in the hustle and bustle of post-round festivities, we missed a few pictures. Our apologies to those we missed. 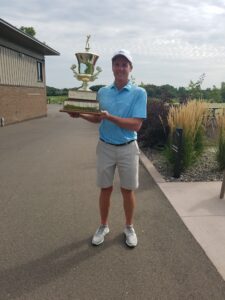 Here’s our Club Champion. Mr. Mike Wangen. I think I’ve said Hi to him once or twice so I can’t tell you much about him. If you want sordid details of his personal life going back to grade school, you will have to consult with folks like Cutter Tyllia, Hoagie, and maybe some WE leaguers who may have heard a story or 2. I was fortunate enough to see the birdie putt on 10 that won last year’s trophy so I can tell you this boy has game. For those of you needing mathematical assistance, that means he’s won it 2 years in a row.  Major Kudos!!! 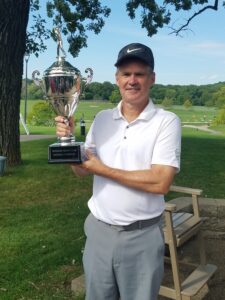 This is Steve Bloomquist. He administers our WE league, for which we are all grateful. But, I have to ask. Does this look like a Senior to you? If I didn’t know better, I’d guess he’s hovering around 30. He has the game of someone around 30 so obviously looks are deceiving. Rumor has it the Senior Championship went to extra innings, where Mike Longman chose to wrap his hands around his neck as opposed to his clubs. In the end, Bloomer hoisted the hardware. 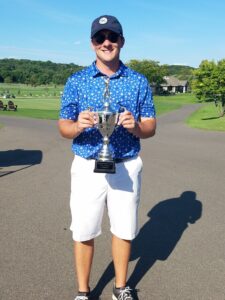 Corey Ross, pictured here, is the least likely individual to hold this trophy. I played against him in the final week of WE league. That day, he couldn’t hit a volleyball. Given the state of my game, it’s a miracle I won the match. But, apparently Mr. Ross heard that Mathias’s bride offered hypnotic services, guaranteed to solve any chipping or putting woes and he took a gander. The result was a GROSS 73, or some such crazy number, and he is now forever memorialized. Corey swept Low Gross for both Flights and Low Net for Flight A.

The Flight B Net Score winner was Jon Whitcomb. Unfortunately, we have no picture. It’s probably for the best as an image would justify my disapproval if my sister/daughter were dating him. 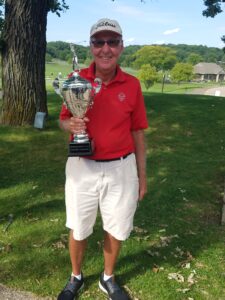 Our Masters Low Gross Champion is John Morton. I have fond memories of John going back to my first year in the BMC while playing a 4 Ball Match with his playing partner Gary Schaefer. I marveled at the silky-smooth swing and asked God to grant me something similar when I got to be his age. So far, the Almighty has not responded to my petition but has granted Mr. Morton the same swing 8 years later.

The Money winner for Low Net in the Masters was Bill Hull. 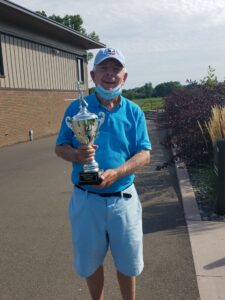 The Super Senior hardware went to Tom Sampson. Like Mr. Morton, he has an effortless swing which has kept him playing in the WE league with all our young guns. You can tell Tom is pretty giddy about winning and he wanted everyone to know it since he opted to suck in every and all covid 19 atoms which may or may not have been in the vicinity. Mr. Sampson swept both Low Gross and Low Net awards despite playing with a 0 handicap from the N tees. We congratulate Tom on his efforts and his choice of poses.