The Ed White Shootout is  an event that honors Ed White, a  beloved member of our club who exemplified integrity and a competitive spirit. The Shootout was played on Sunday under blustery weather with winds that would make hurricane Ian jealous. The competitors with the 10 most EWS points were (from L to R): Denny Russell, Tim Smith, Steve Tanner, Bob Devereaux, Greg Baron, Scott Nelson, Chris Eckes, Larry Fyten, Rick Windom and Marty Weber. Master of Ceremonies Mark Schmidt completes the panorama. 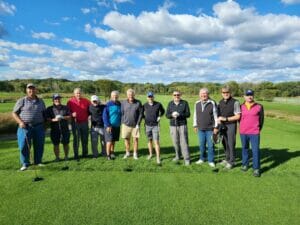 All 10 teed it up and played net stroke play for the first 5 holes. Then, the lowest 5 scores continued to play holes 6-9 in shootout fashion. All played the same hole and worst score was eliminated after each hole. 2 players remained for the 9th hole.
This year, the following 5 made it to the shootout stage eliminated and all won SOMETHING!!! In descending order:
5th Place: Steve Tanner (event coordinator, Thank You!!!)
4th Place: Bob Devereaux (God’s eternal Angel!!)
3rd Place: Rick Windom (Thanks for mentoring me on Best Weekly)
Which now brings us to the final 2. Chris Eckes and Tim Smith. 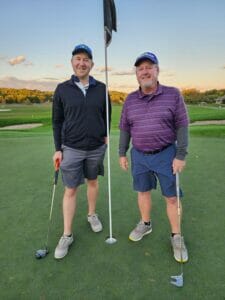 And the winner between these 2 was…….. 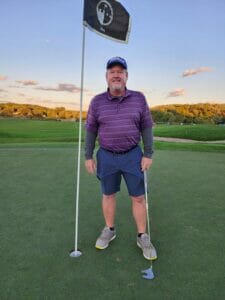 2022 BMC Ed White Champion Tim Smith
Next time you run into Mr. Smith, please offer your congratulation and your thanks for his efforts as acting BMC VP.

The Ed White Shootout is a special event that recognizes active participation among our members. The event is named after a long-time BMC member, Ed White, who exemplified the kind of active leadership for which our club is known.

You accumulate points for every official BMC event in which you participate:

Those with the most points will be invited to participate in the Ed White Shootout which happens at the end of the season. The BMC will cover the greens fees so there is no cost involved to the participants.